We are in the Church Stream today as we finish the book of Acts. We are reading from the God’s Word Translation this week.

Dear Lord, we bid farewell to Paul for now. Thank you for his inspiring life.  Let us be encouraged to make our days count for you and for your Kingdom.  Amen. 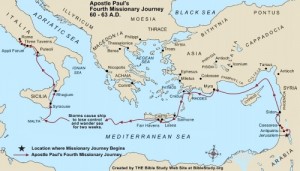 If you look on the map in the back of your Bible or the map we provide in these show notes, take note the route of Paul’s final missionary journey listed in Acts.  The story picks up today between his departing from Myra; the south point of Asia Minor and the wreck in Malta.  Paul took one ship from Caesarea to Myra, another from Myra to Malta, and a third from Malta to Puteoli/ Italy.  This month of Paul’s life, he had the greatest challenges relating to natural calamity.  The dramatic events seem like a cruise gone bad with storms, a damaged vessel, near death at every turn, a fear of starvation, prisoners escaping, painful dilemmas and decisions, people finally swimming to shore or getting there by clinging to a chunk of wood from the broken ship.  Paul ministers to these men even in this setting and they are all encouraged by his gracious deeds and dining with them (if we can use that word).  Paul uses his status even as a prisoner to defend the incarcerated so that they are treated properly. Paul promised that all would reach shore and no one would be harmed and that is what happened.

28 – they discover that they are on Malta from the locals and voila, the locals are friendly.  The snake in the fire incident merely verifies that God is up to something and Paul is soon revered. Paul is then given access to Publius (the leader and his family) and Paul is used to heal his father.  Soon others who are sick come and are healed.  It is fascinating the way Paul makes the most of every opportunity for the gospel and advancing the Kingdom.  The final leg of the journey [from Malta to Rome] is on an Alexandrian ship.  There is excitement to meet and be with Paul as Believers were in many places throughout the Roman Empire by now.  It was 61 A.D. An entire second generation of Christians were growing up and Paul was a celebrated and very honored man to the new Believers.  His teaching was priceless to them.  His letters were prized more than gold by the early church.  His writings became what we follow as most of the New Testament.  Luke finishes the Book of Acts at about this time.  Paul did have impressive audiences to speak to in Rome.  Most were encouraged, some Jews converted through his teaching, other Jews were only made more stubborn thereby.  While he was in Rome, Paul wrote to the Ephesians, Philippians, Colossians, and his book to Philemon.  Paul was later acquitted of his charges later in AD 61 or early the next year.  There is some information telling that Paul made a trip to Spain.  We know he planned one; Romans 15:28.  There is some evidence that there was another missionary journey Paul took to Greece and Asia Minor (and Spain as mentioned).  He wrote his letters to Timothy and Titus during these years between 63-67 A.D.

His influence cannot be overstated in Christian History.  Some have clearly stated that Apostle Paul is the most influential person that ever lived for his explanations of Christ clearly changed the way the world thought.  This affect seeped into the dealings of religion, commerce/business, education, administration, hospitality, social structures, civility, ad infinitum.  Even honest secular scholars admit Paul’s colossal affect on the world.

Visit our New Passenger Orientation page and listen to The Seven Streams Bible Reading Method Intro to understand how the program works.

The one who believes in Me, as the Scripture has said, will have streams of living water flow from deep within him. - John 7:38